A Day in the Life of a Retiree

By Margaret On September 8, 2012 · Add Comment
Guest Writer:  Robert Brown
It was just after 4 am when Brooke got out of bed to get dressed and to go with our son, Kevin, on the deliveries he would make to Hebron, NH, and Cambridge, MA.  They wouldn’t be returning until after 7 pm.  I smiled as I rolled over to go back to sleep.  That could have been me, plus the irony of Brooke getting up early any day was not lost on me.
The day usually starts with breakfast at 5:30 am at Groundworks Farm, except on delivery days, but I was sleeping in—until 6.  After all, I’m retired.  My legs were complaining loudly to me from the constant bending over while harvesting the day before, but I reassured them that today would be easier.
I hobbled out to start the day at 7, one hour after Margaret and their helper Kevin A. had begun.  The first job was sowing seeds: kale and lettuce for fall harvesting.  I smiled. My legs let out a sigh of relief.  The instructions were simple, just one seed per indentation.  You don’t realize how difficult it is to put just one little seed in each indentation until you try it.  Margaret quickly and smoothly fills tray after tray, as I struggle to get the seeds to drop one by one.  Oops, five fell into that one, better move on, darn three in that one.  Well, someone is going to be thinning a bit.  The lettuce seeds were worse.  They look like tiny grass seeds, and they don’t roll out of your fingers easily.  But we finished with seed to spare.
Next on the list was harvesting onions.  My legs said, “hey wait a minute,” but I pointed out that they had just gotten a couple of hours of rest, so suck it up.  Onion harvesting is quite musical, actually.  The tops of the onions stick out of a small hole in the black plastic that they grow in.  You grab the onion and as you pull the onion through the tiny hole, the plastic stretches and rubs against the onion skin, causing a squeaky noise followed by the pop of the onion as it escapes the hold of the plastic.  I liked that.  My legs could have cared less.  We made several trips to the greenhouse to spread the product out to dry.  The heat was intense in the greenhouse, and that slowed me down.  Margaret only left me once, though I took advantage of that to go into the house to down a quart of water.  But I did have a long walk back to the onion field for more onions, and that musical sound. Squeak, pop.  We harvested a lot of onions before lunch.  The greenhouse floor is filled with drying onions.
After lunch we finished the final row of onions, one where the weeds in the walkway had grown so tall that a machete would have been useful to get to the product.  We didn’t have one, but we muscled our way to every onion in the ground.
Next on the list was something less physical: transplanting kohlrabi. Margaret gave me the job of punching three rows of holes into the black plastic , eight inches apart. I was in heaven because I got to use their “toy” hole-puncher.  It is a wheel with spears every eight inches on an axle attached to a four foot long stick with handles.  As you steer the wheel down the bed, the spears make popping sounds when exiting the plastic.  More music!  Then we transplanted: plunge two fingers into the dirt, drop in the plant, and cover.  The hard part was getting them to come out of the flats in one piece.  Margaret did most of that, thank goodness.
That job is now done, and the bending over has finally put my legs on life support.  But we have one more project:  weeding carrots.  I kneel for this one so that I can pull grass and weeds away from the small carrots, cringing when I pull a weed and find a carrot in my hand as well.  But most carrots survive me, surprisingly to me at least.  By 4:30 pm I am sitting on the ground while weeding because I can’t kneel very well anymore.
Margaret then asks me a question.  “If Kevin were here, what would he have you do until 5:30 when dinner will be ready?”  I sense a trick question, but somehow I come up with “By now he would be worried I might die on him, so he would give me the rest of the day off.” That seemed to satisfy her.  I offered to write her farm news for her which thrilled her.  As we completed the weeding Margaret was singing Willie Nelson’s “Don’t Let Your Babies Grow up to be Cowboys.”  We both knew she meant farmers.
So now I am writing this as the sun sets behind the mountains to the west and as the radio plays soft country music.  More music.  I am smiling.  The day’s music has been lovely.  My legs have a different opinion. They tell me this isn’t what I envisioned in my retirement.  So what?  I don’t listen to them. 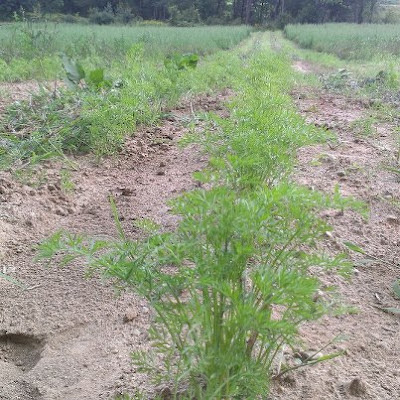