Farm Manager Employment Opportunity The Close of the Summer Season

By admin On November 25, 2013 · Add Comment
Last Friday, with the knowledge that our sweet potato supply was dwindling, we went out and dug up 5 more rows.  The first step in this is to pull the actual vines out of the ground that grow above.  We use black plastic mulch to heat up the soil as sweet potatoes like the heat and we lay a line of drip irrigation in each row as well in order to water them when they need it throughout the season.  So after pulling the plants you go through and pull the plastic out of the ground and the irrigation lines.  Then we come through with a potato digger.  I think I have described this before, but it is pulled behind the tractor and has a shovel and a metal conveyor belt kind of thing which is slatted so that the potatoes stay on it and the dirt falls down.  Then when the sweet potatoes fall off the back of it they land on top of the soil.  Then we come through with boxes and pick them up off the ground and fill the boxes up.  Once all the boxes have been properly filled we drive a big trailer along side of them and pick them all up and stack them on the trailer, then drive them to the walk in coolers and put them into storage.  Well as we began to dig these beds we felt they were giving us a pretty good yield.  Large sweet potatoes (you will see this week at the pick up, some of them are monstrous) made for a heavy yield and pulling them out of the field was not an easy task.  Each box when filled weighed about 55 lbs. We filled about 130 boxes (at least, Kevin lost count at some point in the unloading process).  But at that rate alone we harvested at least 7,150 pounds of sweet potatoes, not to mention there is a whole field of them left to get still.
We also had our first two frosts this week.  We went around preparing for the frosts, especially winterizing things we built this summer that had never needed any protection, like our irrigation well, which now has an insulated building around it. We harvested the last of the peppers which had ground back a little since we last harvested them and you will see a few peppers in your share this week. Tomato plants, which had stopped producing finally, went black and several of the cut flowers did as well (though some live on past several frosts).  Frost is not just about killing summer plants though.  The frost also sweetens many things.  When the plants get cold they start to store up more sugar in order to survive.  This means that kale looses some of its bitterness and becomes sweeter and carrots also begin to store up sugar as well.  So there are advantages to the cold weather that we will see in the flavor of some of the crops. So happy eating this week! 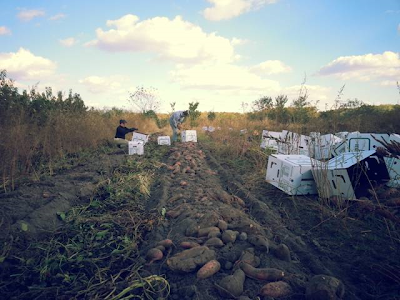