By Margaret On July 21, 2012 · Add Comment
Some days being a farmer can be a very calm job.  You wake up, you look at you list of what you want to get accomplished and you go outside and do all (who am I kidding) most of the things on the list.  You come inside at the end of the day, tired and satisfied.  You eat, go to sleep and get up to do it again.  Ideally it rains while you are sleeping (but not every day).  But if every day went like that we would be too spoiled and it would take the fun out of things.  And so things do tend to go wrong and be less than ideal on many days.
Last Saturday we had a great harvest day.  We got everything done in time and felt good about what was going in the share for the Sunday CSA deliveries.  Over dinner we were talking about what we might be able to get done the next day.  I said something along the lines of: “I bet I can get a lot of carrots weeded if I don’t get any phone calls or anything tomorrow.”  I was making a joke, as when we head out on delivery and I stay back on the farm I usually get a lot of calls asking about details of what is packed, what are the limits for this week, who are the new members who are showing up etc.  After loading the truck and sending Kevin on his way I started my planned out day.  Seeding lettuce, transplanting basil, then as we were about to move on to weeding carrots, my phone rang.  It was Kevin, calling just to let me know that the delivery truck had broken down on the interstate and he was waiting for the tow truck.  “I think it may be the transmission but I’m not sure.  You should email the members.  I think I might be late.”
This is not the kind of message that leaves one with much confidence or direction for the remainder of the day.  I went and sent an email and then I went on with weeding, only now anxiously awaiting the next phone call, one in which I would find out what was actually happening.  That came an hour or so later and only about 30 minutes before the scheduled start time of the CSA pick up.  Kevin called to say that the transmission on the truck was definitely broken but he was in a UHaul truck with all the produce and eggs and was headed to Cambridge.  He was still an hour away, but could I send another email to the members announcing that the pick up would be 1 hour late and he would just focus on driving fast and not missing any turns.  This seemed like a good plan to me.  And so around 1pm (the pick up starts at 12:30) Kevin arrived at the CSA pick up location, set up and people arrived and got their shares.  Of course, I was not entirely aware that he had gotten there until I got the regular phone call, “Hey, what’s the limit on Kohlrabi?” “One per share.” “Thanks, Bye.”  That was when those of us back here at the farm knew that things had turned out alright. 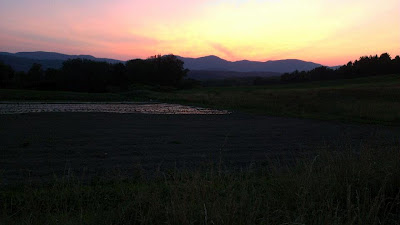